Jolie announces on YouTube she has chickenpox. The beautiful actress/director/philanthropist spoke in disbelief at the timing, but with a healthy attitude saying, “…such is life.” She had to cancel promotional events and attending the premiere of her film, Unbroken, which opens Christmas:

“I just wanted to be clear and honest about why I would be missing the Unbroken events in the next few days, which is that I found out last night that I have chicken pox,” she says in the video, posted to YouTube. “So, I will be home itching and missing everyone and I can’t believe it because this film means so much to me. I just can’t believe it, but such is life. There it is. Send everyone my love and I hope everything goes well!”

We wanted to give Jolie some Health tips to help her get through this. 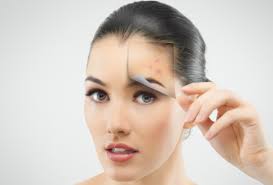 The most important thing Jolie can do is not itch and leave the blisters UNBROKEN: 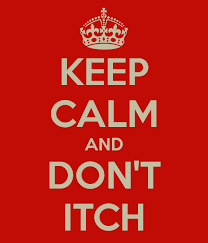 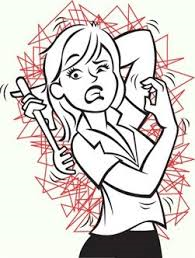 3. REST! DON’T WORRY ABOUT THE PREMIERE! YOUR HEALTH IS MORE IMPORTANT! 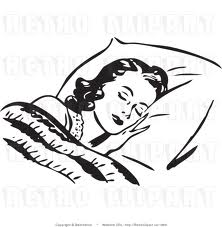 4. DRINK LOTS OF WATER, EAT WELL! NO NEED TO SQUEEZE INTO PREMIERE DRESS!

Since chickenpox is highly contagious she needs to stay away from hubby (ouch again!) and all their kids for at least two weeks. I don’t know who in her family has had it already or not, but you can get it again. It will be milder and symptoms will not last as long the second time. It’s still extremely uncomfortable. 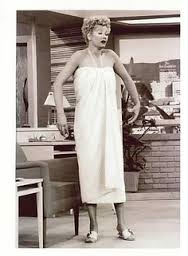 I recall getting chickenpox as an adult myself. Insanely itchy. I looked like a monster. I slept with Calamine lotion all over me. My husband was supposed to stay away from me, but he insisted on staying by my side. I’m sure Brad is going to have an even tougher time.

I felt like Lucille Ball in that episode when she got a bad sunburn right before a big show. Angelina Jolie is probably feeling that way right now.

Lucy ended up going to the show. Hilarity ensues because she’s in great pain as people keep tapping her on the shoulder. Jolie made the healthy choice!

The next hardest part will be trying not to itch. We researched the best remedies.

When I was a kid, calamine lotion was used. 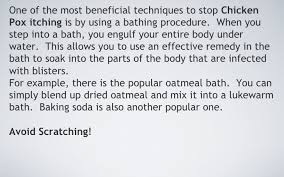 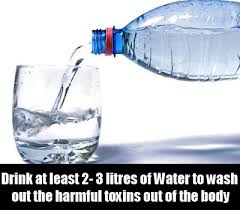 HERE’S MORE ON HOW TO USE OATMEAL AND BROWN VINEGAR and HONEY FROM “TOP 10 HOME REMEDIES FOR CHICKENPOX”:

2. Pour that into a cloth bag. Secure tightly. Drop it into tub of warm water. Swirl it around until water becomes milky in color. Soak in it for as long as it feels soothing and relieves itching.

Add one-half cup of brown vinegar to lukewarm bathwater. Soak in it as long as needed.

WHAT OVER THE COUNTER PRDUCTS WORK?

I am a huge fan of AVEENO products. They have what looks like a modern day Calamine lotion, although I would still pick up the old kind too: 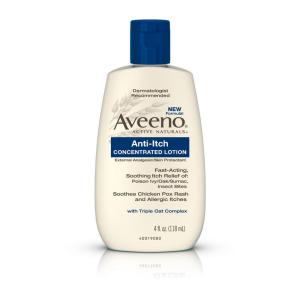 Chickenpox is caused by varicella zoster virus. It is usually mild unless person has impaired immune system.

Almost everyone gets chickenpox by adulthood. 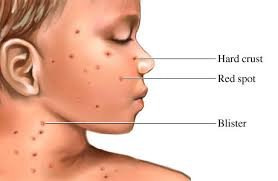 WHAT ARE THE SYMPTOMS OF CHICKENPOX?

Chickenpox has a characteristic itchy rash which forms blisters that dry and become scabs in 4�5 days. An infected person may have anywhere from only a few lesions to more than 500 blisters on their body during an attack (average 300�-400).

The rash may be the first sign of illness, sometimes coupled with fever and general malaise (“feeling lousy”), especially in adults.

Chickenpox is highly contagious. The virus spread from person to person by direct contact, or through the air. Approximately 90% of persons in a household who have not had chickenpox will get it if exposed to an infected family member.

HOW LONG DOES CHICKENPOX TAKE TO DEVELOP?

Chickenpox develops within 10-21 days after contact with an infected person.

HOW SOON IS CHICKENPOX CONTAGIOUS?

Chickenpox is contagious 1-2 days before the rash appears and until all blisters have formed scabs.
Adults are more likely to have a more serious case of chickenpox with a higher rate of complications and death.

HOW MANY PEOPLE ARE HOSPITALIZED WITH CHICKENPOX AND CAN YOU DIE FROM IT?

Every year there are approximately 5,000-9,000 hospitalizations and 100 deaths from chickenpox in the United States.

CAN PEOPLE WHO HAVE BEEN VACCINATED STILL GET CHICKENPOX?

Cases of disease due to the natural virus that may occur in a small proportion of vaccinees (people who have had the vaccine) are typically very mild with less than 50 skin blisters and no fever.

More than 6 million doses of varicella vaccine have been given since it was licensed in March 1995.
The Centers for Disease Control (CDC) recommends that all children be routinely vaccinated at 12-18 months of age and that all susceptible children receive the vaccine before their 13th birthday.

The vaccine is also approved for susceptible adolescents and adults especially those with close contact with persons at high risk for serious complications (e.g., healthcare workers, family contacts of immunocompromised persons).

A history of chickenpox is considered adequate evidence of immunity.

WHAT IF SOMEONE IS UNSURE IF THEY HAVE BEEN VACCINATED OR NOT?

A blood test is available to test immunity in persons who are uncertain of their history or who have not had chickenpox. Many of these persons will find that they are immune when tested and thus will not need to be vaccinated.

WHAT IS THE TREATMENT FOR CHICKENPOX?

Effective medications (e.g., acyclovir) are available to treat chickenpox in healthy and immunocompromised persons (e.g, those with cancers, HIV/AIDS, receiving medications that depress the immune system).

Varicella zoster immune globulin (VZIG), a type of immune globulin made from plasma from healthy, volunteer blood donors with high levels of antibody to the varicella zoster virus, is recommended after exposure for persons at high risk for complications (e.g., immunocompromised persons, pregnant women, premature infants <28 weeks gestation or < 1000 grams at birth and premature infants whose mothers are not immune).

WHEN SHOULD ADULTS BE VACCINATED AGAINST CHICKENPOX?

According to WebMD, all adults who have never had chickenpox or received the vaccination should be vaccinated against it. Two doses of the vaccine should be given at least four weeks apart.

WebMD says if you’ve never had chickenpox or been vaccinated and you are exposed to chickenpox, being vaccinated right away will greatly reduce your risk of getting sick. Studies (they do not indicate which studies) have shown that vaccination within three days of exposure is 90% effective at preventing illness; vaccination within five days of exposure is 70% effective. If you do get sick, the symptoms will be milder and shorter in duration.

WHAT IF I HAVE A BAD REACTION TO A VACCINE?

WHO SHOULDN’T GET THE CHICKENPOX VACCINE?

You should not be vaccinated against chickenpox if you:

•Are moderately to severely ill at the time of vaccination
•Are pregnant (women should not become pregnant for one month after receiving the chickenpox vaccine)
•Have ever had an allergic reaction to gelatin, the antibiotic neomycin, or a previous dose of chickenpox vaccine

These people should check with their doctor about getting the chickenpox vaccine:

HOW LONG WILL CHICKENPOX LAST?

The worst symptoms will usually subside in two weeks, but you need about a month after any virus to build up your immune system. Remember, you’re losing sleep when symptoms are at their worst, which can wreak havoc on your already compromised system. The worst symptoms include fever, fatigue, loss of appetite, along with irritability and sleeplessness that come from the intense itching. It can hurt when you can’t find relief. It’s also difficult you feel unsightly because of them. It will subside.

Questions? Feel free to send them to maria.dorfner@yahoo.com

Hope this helps. It has to be extremely frustrating for this to happen right before a big event, and after having worked so hard on it.

Angelina Jolie still looks better with chicken pox than most folks look on a red carpet. Sometimes, these things are natures way of telling us we need to stop and rest. Wishing her the best and a healthy, happy and humor-filled recovery.

MEDCrunch is a division of Healthy Within Network. MEDCrunch blog is designed for educational purposes only. It is not intended to serve as medical advice. The information provided on this site is not a substitute for professional care. If you have or suspect you may have a health problem, you should consult your health care provider.

MEDCrunch was created by veteran health and television producer, Maria Bianco Dorfner.  She founded NewsMD in 2000, a production company specializing in health stories.  Maria created HEALTHCARE CONSUMERS and HEALTHY LIVING in 1993 and co-anchored it for 3 years. She pitched the program to CNBC (which he helped launch in 1989) and it aired weekly nationally.  She went on to develop five more health series for the cable network. She also wrote, produced and directed 21st CENTURY MEDICINE for DISCOVERY HEALTH CHANNEL. She has interviewed a Who’s Who in pioneering medical discoveries and has specialized in health for 22 of the 30 years she has worked in Media.  She is the author of HEALTHY WITHIN: A Story About Loss and Gain. She is the founder of Healthy Within Network (HWN), a 24-hour health channel that will focus on positive news stories around the world and health, wellness and beauty from the inside out. Her stories have programs have won multiple awards including a Freddie for Excellence in Health Reporting and a Media Recognition Award from American Heart Association for her heart smart series. She is in Who’s Who in American Women.  Most recently, she created HEALTHY WITHIN pilot for NBC network at their request.

She can be reached at maria.dorfner@yahoo.com

MEDCrunch does not accept advertising.