“Triumphs of Experience” by George E. Vaillant published four years ago, is an interesting read on the longest longitudinal study of human development beginning in 1938. The study was led by psychiatrist & Harvard professor, Robert Waldinger.

At a time when many people around the world are living into their tenth decade, the longest longitudinal study of human development ever undertaken offers some welcome news for the new old age: our lives continue to evolve in our later years, and often become more fulfilling than before.

Begun in 1938, the Grant Study of Adult Development charted the physical and emotional health of over 200 men, starting with their undergraduate days.

The now-classic Adaptation to Life reported on the men’s lives up to age 55 and helped us understand adult maturation. Now George Vaillant follows the men into their nineties, documenting for the first time what it is like to flourish far beyond conventional retirement.

Reporting on all aspects of male life, including relationships, politics and religion, coping strategies, and alcohol use (its abuse being by far the greatest disruptor of health and happiness for the study’s subjects), Triumphs of Experience shares a number of surprising findings.

While the study confirms that recovery from a lousy childhood is possible, memories of a happy childhood are a lifelong source of strength.

Physical aging after 80 is determined less by heredity than by habits formed prior to age 50.

The credit for growing old with grace and vitality, it seems, goes more to ourselves than to our stellar genetic makeup. 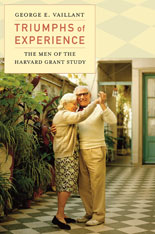 The Men of the Harvard Grant Study

George E. Vaillant, M.D. determined your relationships are the most important single thing in your well-being.” The author adds, “It’s been gratifying to find support for something as sentimental as love.”

The Harvard Grant Study is the longest scientific study of male development and adjustment to life. It began in 1938 and is still active today, 79 years later.

Listed below are 10 findings:

The study conducted an in-depth examination of the lives of 268 Harvard University sophomore men (classes of 1942, ‘43, and ‘44) commencing at age 19 and following participants to the end of their lives. Some are still alive. They include blue-collar workers, professors, artists, and a former U.S. president. The purpose of the Study was to “transcend medicine’s usual occupation with pathology by learning something about optimum health and potential, and the conditions that promote them.” The study has uncovered clear predictors of physical and psychological health of men.

Vaillant joined the study as head researcher 45 years ago when he was only 32 years old. As he notes throughout the book, this study is a telescope of sorts: it has gathered valuable insights that suggest the variables that predict success and optimum health of men. The variables studied were diverse and included (but are not limited to) childhood environment, genetics, maturation, work, alcohol use and abuse, coping styles, marriage, and social support.

Researchers also conducted interviews with three generations of relatives. As you can imagine, 75+ years, 268 men, information from their relatives, and thorough objective psychosocial and biomedical health data have generated a vast reservoir of information about the antecedents of optimum health and success for men.

The Gift of Longitudinal Prospective Research

The Grant Study employed a longitudinal prospective design in which participants continue to be followed in real time, information is collected on numerous variables of interest as their lives progress, and outcomes are identified as they occur.

This is unlike retrospective designs in which the outcomes are known before the variables are identified, which can lead to errors in distinguishing between causes and correlations.

In prospective longitudinal research, the outcomes and what led to them are documented throughout the person’s life. Researchers can look at behavior in-the-moment, which makes it easier to see what predicts future behaviors. The dynamic resource of information gives context to the outcomes.

A Glimpse Into the Findings

The entire list of interesting discoveries documented in this book is much too long to encompass in a short review, but I’ll share a few captivating teasers.

The men supplied thorough information about their biomedical and psychosocial health. A few of the biomedical variables were EEG, scrotum length, and blood pressure.

In line with the study’s purpose, the book describes Vaillant’s Decathlon of Flourishing. The Decathlon is a set of 10 accomplishments in late life that covered many different facets of success.

Examples include good subjective and objective physical and mental health at age 80, being in a good marriage between ages 60 and 85, and being close to kids between ages 60 and 75. He wanted to see how and if these accomplishments correlated with three predictor variables:

These three variables often showed to have very significant associations with late-life success, as researchers processed the goldmine of valuable information, with the most important being:

The Men of the Harvard Grant Study