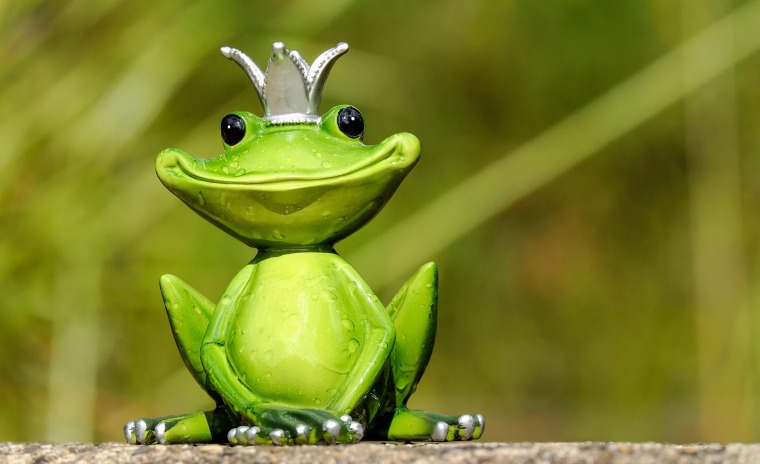 When I think of a frog I think of an amphibian, Kermit, a science experiment or Prince Charming.

This weekend, I learn frogs are also a delicacy, when my friend Adam Yenser confidently orders frog legs, right after I order brussel sprouts as an appetizer at the lovely Bayou restaurant in Easton, Pennsylvania.

I carry on about Brussel sprouts being one of the healthiest foods in the world — a cup a day offers an amazing dose of antioxidants. But frogs?!?

Adam says they’re real high in protein. We knew I’d research it, so we photograph the specimen.  Below is the crispy fried frog baby.

You’d never even know what’s under the bread crumbs if the menu didn’t say FROG LEGS.

Turns out, Adam is correct. Frog legs ARE healthy AND real high in protein. Men’s Health calls them a nutritional powerhouse. Apparently,  frog legs are one of the better-known delicacies of French and Chinese cuisine.

According to Wikipedia, frog legs are eaten in parts of the Southern United States, particularly in the Deep South and Gulf states where French influence is more prominent, including South Carolina, Georgia, Florida, Alabama, Mississippi, and Louisiana. They are also eaten in Eastern states, but not as commonly.

The most common kinds of frogs eaten are bullfrogs and leopard frogs, as these are abundant in most of the country, including the South. Although the consumption of wild native frogs is generally discouraged, the harvest and cooking of invasive bullfrogs, especially in the Western US, has been encouraged as a form of control and to promote local cuisine.[19]

“They are also consumed in other parts of the world, including Vietnam, Thailand, Indonesia, Northern Italy, the Alentejo region of Portugal, Spain, Albania, Slovenia, Romania, the northwest Greece and the Southern regions of the United States. As of 2014, the world’s largest exporter of frogs is Indonesia, also a large consumer.” It’s considered a Paleo meat and is very lean. Who knew?

I was squeamish to taste a tiny sliver, which tastes like real tender, mild chicken.

And it actually can be prepared in a variety of ways: deep fried, steamed, stewed or grilled, crumb breaded or battered.

Here’s more information about the nutritional value of frog legs:

Four caveats.  First, it’s recommended you use less salt when cooking them. Secondly, they’re not considered kosher.  Despite that, it’s estimated that humans consume up to 3.2 billion frogs for food around the world every year. Wow. That’s one heck of a lot of frogs.

I recall once reading an article in the New York Times about frogs mysteriously dying and vanishing from Costa Rica.  Scientists couldn’t figure out why. They were actually testing them in labs and couldn’t do anything to make them die.

The weird thing is they not only found so many of them dead, but when they returned later, they were gone. I’m thinking they may want to consider murder. Nancy Drew here thinks when you have billions of customers, lots of money is involved.  Think wildlife trafficking. Case solved. You’re welcome.

And I may have just answered my own question above. Oh, it’s not natural causes.

Back to more caveats. Environmentalists urge the restriction of frog consumption, especially those harvested from the wild, because amphibian populations are declining (see? murder!) and frogs are an essential element of ecosystems.

Finally, edible frogs need to be raised in an environment free of toxicity.

I’m not sure how you check how the frog on a menu was raised.  I suppose you rely on the quality of the restaurant you’re in.

Here in Easton, PA  healthy living is a thing, so those were probably healthy frog legs.

Now you know eating frog legs is healthy! Murdering them is not.

Maybe one day we’ll be hearing, “A frog leg a day keeps the doctor away!”

Until then, I may return to being vegan. Meantime, when Adam isn’t contributing to the murder of high protein amphibian limbs, he’s a comedian and Emmy Award-winning writer for The Ellen DeGeneres Show. A native of Pennsylvania, Adam began performing stand-up at The Upright Citizens Brigade Theatre in New York City. He has appeared on Conan, has written for The Oscars, and has been a freelance contributor to SNL’s Weekend Update. Adam mixes sharp observational humor with a uniquely conservative political perspective and was named Best New Political Comedian at Politicon 2015. He can be seen on Ellen as a correspondent and in the recurring hidden camera segment “Kevin the Cashier Played By Adam.” Adam is a graduate of Penn State University, where he recently returned to serve as a commencement speaker.

The Ellen DeGeneres Show is on hiatus for summer, so he will be performing live next in PA at the Mohegan Sun Wisecrackers in Wilkes-Barre, PA Friday, July 13 and Saturday, July 14 and at The Hamilton in Allentown, PA next Friday, July 20!

Of course, I now want to save frogs. I have to find NYT’s article –funny it didn’t even occur to them nefarious humans may be the culprit of disappearing frogs.