ScienceDaily (Feb. 24, 2012) — By training birds to ‘get rhythm’, scientists uncover evidence that our capacity to move in time with music may be connected with our ability to learn speech.

Even though typical dance-floor activity might suggest otherwise, humans generally demonstrate a remarkable capacity to synchronize their body movements in response to auditory stimuli. But is this ability to move in time to musical rhythm a uniquely human trait?

Some animals are capable of vocal learning, changing the sounds they make in response to those they hear from other members of their species. Scientists have hypothesized that such behavior may be associated with the capacity for so-called ‘rhythmic synchronization’. 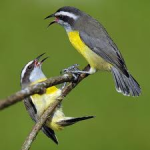 “Motor control of vocal organs is naturally important in vocal learning,” says Yoshimasa Seki of the RIKEN Brain Science Institute in Wako. “Once auditory-motor coordination in the vocal control system has been established, a similar auditory-motor transformation system for other body parts might be derived from that.”

Studies in vocal-learning species have largely focused on case studies of individual animals, but Seki and colleagues conducted larger-scale experiments and found that budgerigars (Fig. 1) may have an inherent capacity for rhythmic synchronization. The researchers tested their hypothesis by training eight budgerigars to peck a button in response to the rhythm of an external metronome, which could be adjusted to present the birds with audio-visual stimuli at varying intervals.

In all 46 experiments, the birds were able to consistently respond to rhythmic beats within a certain time-frame, demonstrating successful entrainment. However, the accuracy of their timing was dependent on the tempo. Only one out of seven birds was successfully able to match the onset of each beat when the stimuli were generated at 450 millisecond intervals, while all animals achieved this feat when that interval was lengthened to 1,500 or 1,800 milliseconds.

To confirm that actual synchronization was taking place, the researchers used computer simulations of other bird behavior scenarios, such as random pecking or responding directly to individual stimuli rather than the rhythm itself. However, none of these alternative models was sufficient to explain the observed activity. “Our results showed that budgerigars can show rhythmic movements synchronized with external stimuli, which means they potentially have this capability of auditory-motor entrainment as a species,” says Seki.

As such, this species may offer a useful model for future investigations of the neurological mechanisms that potentially connect vocal learning with rhythmic synchronization in both birds and humans. “Such studies should contribute to discussions of specific characteristics of the human speech system and its similarity to the vocal learning systems found in other animal species,” explains Seki.

The budgerigar (below), Melopsittacus undulates, is one of several vocal-learning species of parrot, well known for its capacity to mimic human language. (Credit: Copyright : 2011 Yoshimasa Seki)

The above story is reprinted from materials provided by RIKEN, via ResearchSEA.

Note: Materials may be edited for content and length. For further information, please contact the source cited above.

Disclaimer: This article is not intended to provide medical advice, diagnosis or treatment. Views expressed here do not necessarily reflect those of ScienceDaily or its staff.

Babies Are Born to Dance, New Research Shows (Mar. 16, 2010) — A study of infants finds they respond to the rhythm and tempo of music and find it more engaging than speech. The research suggest that babies may be born with a predisposition to move rhythmically … > read more

Newborn Infants Detect The Beat In Music (Jan. 27, 2009) — Researchers have demonstrated that two to three day old babies can detect the beat in music. This phenomenon – termed ‘beat induction’ – is likely to have contributed to music’s origin. It enables … > read more

Some Vocal-Mimicking Animals, Particularly Parrots, Can Move To A Musical Beat (May 1, 2009) — Humans aren’t the only ones who can groove to a beat — some other species can dance, too, a new study reveals. The capability was previously believed to be specific to humans. Researchers found that … > read more

No Easy Answers In Evolution Of Human Language (Feb. 21, 2008) — The evolution of human speech was far more complex than is implied by some recent attempts to link it to a specific gene a professor of computational linguistics. Some researchers in recent years … > read more
Musical Aptitude Relates to Reading Ability (Oct. 17, 2011) — Auditory working memory and attention, for example the ability to hear and then remember instructions while completing a task, are a necessary part of musical ability. But musical ability is also … > read more
Brain Training Games — Improve memory and attention with scientific brain games.
www.lumosity.com