Health officials are specifically citing tanning salons as a major source of the increase, the April issue of Mayo Clinic Proceedings suggests.

Researchers examined records from a decades-long database of all patient care in Olmsted County, Minn., and looked for first-time diagnoses of melanoma in patients ages 18-39 from 1970 to 2009, writes Janice Lloyd for USA Today. Melanoma cases increased eightfold among women in that time and fourfold for men, the authors say.

Report co-author Jerry Brewer, a dermatologist at the Mayo Clinic told Lloyd: “We need to get away from the idea that skin cancer is an older person’s disease.”

Know What to Look for: the ABCDE’s of Skin Cancer:

A — asymmetry: one side of a mole or dark spot looks different from the other side

B — border: instead of being circular or oval, the mole has a jagged edge

C — color: the mole has more than one color, a dark area, a light area or the colors red, white or blue within it

D — diameter: the mole is larger than 6 mm across, roughly the size of a pencil eraser

E — evolution: any other changes are noted in the mole, even if the change can’t be categorized by A, B, C or D, above. Any itching or bleeding in a mole is also important 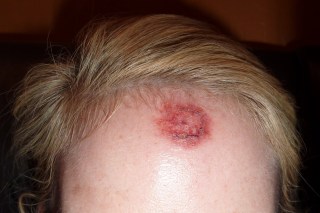 My Husband took a few days leave to support me during a crazy schedule! LOVE this man!

Week Three…that is ALL cancer being attacked. 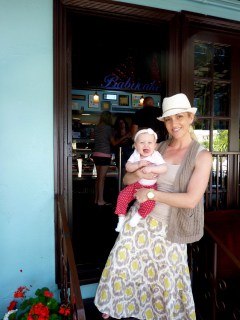 Thankfully I can rock the you know what out of a hat and have tons of cute ones now! Another reason to shop!

Week five and over it! My face was so tender and swollen here. 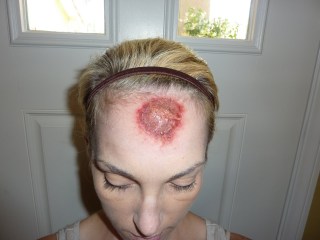 Hoping it does not leave too bad of a scar. Thankful for laser treatment!